Home | Americas | Did You Know?

Dairy resin, like the milk jug, was developed at the Clinton Plant in the mid-90’s and became a key product for LyondellBasell. To date, the line has grown into the largest High Density Polyethylene (HDPE) line at the facility.

The LyondellBasell Clinton Plant delivers over 200 Million pounds of resin per year to the United States dairy industry. This is equivalent to over 1.4 Billion gallon milk jugs a year.

The HDPE pellets are manufactured at LyondellBasell and then transported by rail or truck to a third-party to create the milk jug out of the produced resin. 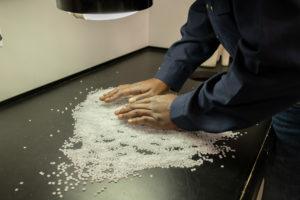