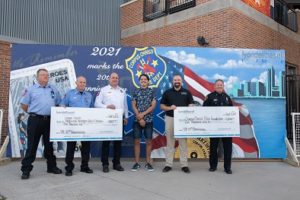 Corpus Christi, September 11, 2021 – LyondellBasell (NYSE: LYB) and the Corpus Christi Hooks unveiled a custom community mural honoring the 20th anniversary of 9/11 and first responders. LyondellBasell commissioned local artist, Jeremy Flores, to design the mural. Following the ceremony, the local fire department, police department and military held a memorial stair climb event.  For the second year, local first responders and military donned their uniforms and climbed the same number of steps as one or both of the Twin Towers.

“On that fateful day 20 years ago today, first responders in New York rushed towards danger to help those in need at the Twin Towers, and we will never forget their astounding bravery,” said Mike Middleton, LyondellBasell Corpus Christi Site Manager. “LyondellBasell is proud to support and honor our first responders who bravely put their lives on the line every day to protect and serve our communities when we need them most.”

The mural features police, firefighters and medical workers. It will be on display at the Corpus Christi Hooks stadium for the LyondellBasell First Responders Night, a special event to recognize local first responders for their bravery and courageous work on game day. Following the game, the mural will move to its new location at Corpus Christi Fire Station #2 located at 13421 Leopard St, Corpus Christi, TX 78410.

The first donation of $5,000 was presented to Corpus Christi Firefighter Relief and Outreach Foundation, a nonprofit organization formed by Corpus Christi Firefighters. The foundation was created to help displaced families due to residential fires in the coastal bend area and help local, state and nationwide active firefighters and their families due to any serious illness or injury with monetary donations.

The second donation of $5,000 was presented to Corpus Christi Police Foundation, a nonprofit organization formed in 2010 by former business leaders to support the Corpus Christi Police Department. Donations made by individuals, corporations and foundations fund special programs, officer training, equipment, and new technology.

“The Hooks are honored in supporting LyondellBasell’s recognition of local First Responders,” Hooks General Manager Brady Ballard said. “We are privileged in hosting the police, fire and military who are participating in the 9/11 Stair Climb Tribute in honor of so many who served and sacrificed that memorable day.”

This year’s LyondellBasell First Responders Night is at 7:05 p.m. on Saturday, Sept. 11. Fans can stop by the LyondellBasell table at the game and pick up a first aid kit and commemorative magnet of the mural.

LyondellBasell is committed to being a responsible, good neighbor in the communities where we operate and through our global citizenship program, Advancing Good. The company invests in community organizations supporting three key areas: Advancing Our Communities, Our Planet and Tomorrow’s Workforce. Since 2018, LyondellBasell has provided more than $24 million in charitable giving and 43,000 employee volunteer hours.

Locally, LyondellBasell’s Corpus Christi site is involved in many educational, well-being and environmental programs within our community. The site hosts educational tours and presentations for local schools,  provide workforce training and preparedness for the Craft Training Center of the Coastal Bend and partner with Del Mar College on scholarship programs for students pursuing degrees in the petrochemical industry. Additionally, the site supports United Way of the Coastal Bend, the Coastal Bend Bays Foundation, the Texas State Aquarium, the Purple Door, and the American Diabetes Association.

For more information about how the company is making a difference globally, visit the Advancing Good page.