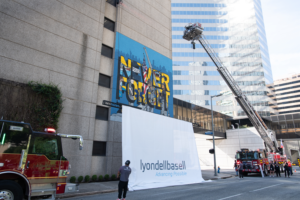 “We will never forget the bravery and heroism demonstrated by first responders on 9/11. For the 20th anniversary, we are proud to honor those who not only lost their lives but also those who continue to serve and protect us every day,” said Kim Foley, LyondellBasell senior vice president, Health, Safety and Environment, Global Engineering and Turnarounds. “First responders are an integral part of our company and our industry, allowing us to operate safely each and every day. Through their dedication and diligence, we are able to keep our employees and our communities safe.”

LyondellBasell fire trucks and emergency response team members, along with the Houston Police Department’s mounted patrol, unveiled the unique community mural, located at the corner of Caroline and Walker in Downtown Houston. LyondellBasell commissioned local artist and Houston’s own Alex “Donkeeboy” Roman Jr. to create a mural. His mom, Sylvia “Donkeemom” Roman worked side by side with her son to paint the mural.

“The mural serves as a reminder to never forget the brave men and women who act selflessly and courageously for our communities and our country,” said Mayor Sylvester Turner, City of Houston. “To have local artist Donkeeboy showcase his talents by paying tribute to our first responders is truly remarkable.” 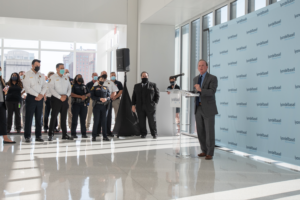 The second donation, in honor of the 20th anniversary of 9/11, will provide $100,000 to the Texas Task Force Foundation, a federal response team under FEMA’s National Urban Search and Rescue System and a statewide response team under the Texas Division of Emergency Management. This team of volunteer first responders have played critical roles in response efforts during many major U.S. crises including 9/11, tornadoes, and countless hurricanes, even contributing to current response efforts for Hurricane Ida.

LyondellBasell is committed to being a responsible, good neighbor in the communities where we operate and through our global citizenship program, Advancing Good. The company invests in community organizations supporting three key areas: Advancing Our Communities, Our Planet and Tomorrow’s Workforce. Since 2018, LyondellBasell has provided more than $24 million in charitable giving and 43,000 employee volunteer hours. 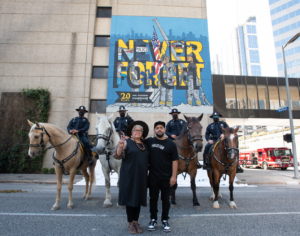 Additionally, LyondellBasell will serve as presenting sponsor for the Houston Astros’ First Responders Night, recognizing local first responders for their bravery and courageous work on game day. This year’s special game is at 7:00 p.m. this Saturday, Sept. 11. Fans can stop by the LyondellBasell table at the game and pick up a first aid kit and commemorative magnet of the mural. Also, the first 10,000 fans attending the game will have the opportunity to receive a commemorative challenge coin.

For more information about how the company is making a difference globally, visit LyondellBasell’s Advancing Good page.