The new centralized office of LyondellBasell India was opened in May. With the consolidation of all LyondellBasell locations in India into a new office in Mumbai, the LyondellBasell Advanced Polymers Solutions (APS) Pune office was closed at the end of April. In the process of transitioning, APS colleagues identified several second-hand electronic devices that were no longer required and decided to donate these to needy students via the Dattatray Foundation. The donation event was held April 26, 2022. 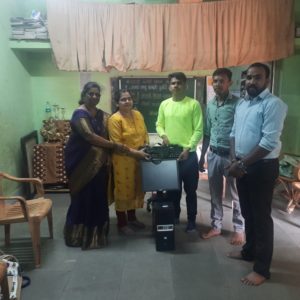 Dattatray Foundation is an NGO based in Pune with its vision of “From Community To Community.” The foundation brings less fortunate people into the mainstream by providing training, education, and other opportunities that enable them to lead a life of dignity.

During the pandemic, many underserved children in India, especially young girls, were forced to drop out of the formal education system due to a lack of infrastructure and funds to acquire mobiles or computers for virtual classes.

Through LyondellBasell’s global corporate citizenship program, Advancing Good, we are committed to making meaningful investments to support the communities where we live and operate. As Team India’s motto shows, “We want to help make someone’s world a slightly better place, no matter how small the action is.”

Seventeen laptops, eleven desktops, two printers, and other related equipment were donated. Lakshman Iyer, Managing Director, APS AFMEI said, “With virtual learning becoming the norm post-pandemic, digital tools are now an essential part of any student’s kit. In the villages of India, access to infrastructure is still evolving. LyondellBasell recognizes the need to make fundamental tools available to students to help advance their learning and growth.”

The Dattatray Foundation thanked LyondellBasell and mentioned that the donation contributes to “the effort of tech-friendly education.” This donation exemplified the shared value of Dattatray and LyondellBasell Advancing Tomorrow’s Workforce.