HOUSTON – Dec. 2, 2020 – LyondellBasell (NYSE: LYB), one of the largest plastics, chemicals and refining companies in the world, today announced it has been named to Newsweek Magazine’s 2021 list of “America’s Most Responsible Companies.” This is the second time LyondellBasell appears on the list, which debuted in 2020 and recognizes companies for their performance in the areas of environmental, social and corporate governance. 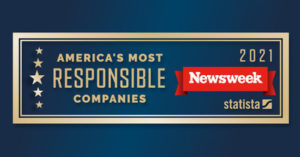 “While awards and recognition are never our primary objective, it’s gratifying that our employees’ efforts to help eliminate plastic waste in the environment, address climate change and provide solutions that support a thriving society are being recognized,” said Bob Patel, CEO of LyondellBasell. “We believe these efforts are critical to addressing some of the world’s biggest challenges in addition to creating long-term value for our stakeholders.”

In 2020, LyondellBasell advanced its sustainability agenda by setting one of the most ambitious targets for recycled and renewable-based polymers in the industry, progressing on the goal of zero pellet loss from operations and transportation, starting up the company’s MoReTec molecular recycling pilot plant at its Ferrara, Italy site, and expanding efforts in its supplier code of conduct. More information on these efforts can be found on the company’s sustainability web page.

In addition, under the company’s “Advancing Good” philanthropy approach, the company has made a number of significant investments within the communities where we operate around the world, including:

To determine which companies were “tops when it came to doing good,” Newsweek, in partnership with Statista, analyzed the top 2,000 public companies by revenue in 14 industries in the United States. 400  companies were selected for inclusion on the list based on publicly available key performance indicators derived from CSR Reports, Sustainability Reports, and Corporate Citizenship Reports as well as an independent survey of U.S. residents. More information on Newsweek’s “America’s Most Responsible Companies 2021” list can be found here.